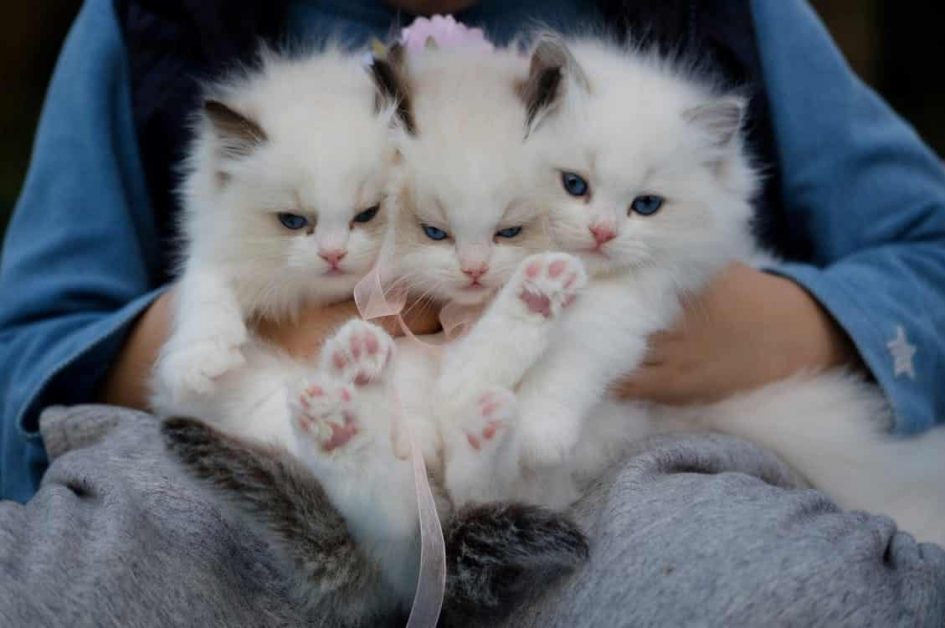 Why Do Cats Purr? | It’s Not Just Because They’re Happy

Why do cats purr? Most people assume they do it when they are happy, but that’s not really the case, according to experts. Here are some reasons why your cat may purr.

Curling up in a cozy spot with a cat as he purrs can be quite relaxing for all of us. But those cat vibrations, while comforting, are still shrouded by mystery. Why do cats purr? Most cat parents assume that their favorite furball is purring out of happiness, but this isn’t always the case, according to most experts.

While there is no specific reason for cats purring, there are a lot of great hypotheses that we will go over today. One of the most common observations that most people have is that cats purr when they feel good or pleasant. However, experts have found that they can also purr when they are frightened, injured, or hungry. One very surprising discovery was that the frequency of a cat’s purring can actually stimulate the bone regeneration abilities of their bodies!

Let’s learn more about our favorite felines and finally answer the question: why do cats purr?

Cats use their diaphragm and larynx muscles to purr by exhaling and inhaling in a certain way. There isn’t a lot of research into how exactly their central nervous system is able to control and generate the contractions. In the early 19th century, the cat family was divided by taxonomists between cats that roar and cats that purr. The ‘roarers’ were known as Pantherinae, such as lions, while ‘purrers’ were known as Felinae, such as your normal house cats or bobcats.

However, modern taxonomists have concluded that most cat species can purr with some notable exceptions, including jaguars, leopards, lions, and tigers. It is quite surprising to think about big cats like cheetahs and cougars purring, isn’t it?

Scientists have recorded some ordinary purring sounds that are specifically designed to solicit food from you. Even people who don’t own cats can differentiate between these purrs and others. The ordinary purr for food runs at a higher frequency to get the attention of the human. It can even sound somewhat like a cry or meow. These sounds can mimic the crying of a baby or kittens. Since humans are sensitive to the sound of a baby crying out, we tend to respond similarly to the cry hidden inside the cat’s purr.

Some cats will begin purring loudly when they are exploring new environments. If you bring introduce the cat to a new room or piece of furniture, they may purr while sniffing around the new object. Cats have also been found to purr when they are startled or nervous. If they encounter a stressful experience like fighting with another animal or being chased, they may purr then too. Experts have noted that the purring may be an attempt to self-soothe by the cat in such cases.

RSPCA reports that there is still a long way to go to properly understand why cats purr in the wild. Purrs can indicate if cats want to share resources or want something from other cats. They also tend to purr when they are grooming each other.

One major hypothesis that scientists have found is that the cat purr results in powerful healing. The vibrations that occur from the purr are rejuvenating for the cat physically; it’s a way to heal after feeling stressed out. These vibrations can range from 20Hz to 150Hz, which is known to promote bone regeneration. The bones in the body respond to the vibrations and harden, which can stimulate growth. Other types of frequencies are known to do the same to tissues in the body as well.

The 25-100Hz frequency of the purr is also known to be healing for humans in some therapeutic medicine branches. The 25-50Hz is known to elicit favorable responses in bones and around 100Hz for soft tissues and skin.

We often see our cats lounging around the home, purring as they doze. In reality, the purring results in a self-repair for the cats. The animals have adapted this as normal behavior for them; they rest a lot during the day to avoid getting injured by overly exerting themselves. The purr is one low-energy solution to make sure their tissues and bones stay in top condition when they are resting.

The purring action isn’t just advantageous for cats but for humans too. Petting or stroking a cat is also known as a stress reliever for humans. Owning a cat is known to reduce the risk of heart disease and stroke by one-third. The frequency of the purring can be healing for us too. It has immense psychological effects, too, since the purring can be quite a calming stimulus like waves on a beach.

So why do cats purr? For a multitude of reasons! When they are happy, relaxed, hungry, or stressed, cats can purr. And let’s be honest, their purring is quite effective since we often tend to feed our cats first thing in the morning, even before we properly wake up, if they wake us up with their purring. To get to the bottom of why your cat is purring, look at the context, and you will definitely know what they are trying to communicate.